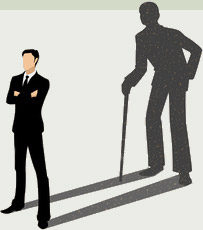 What causes human aging?
Can aging be slowed or even reversed?

Under ideal conditions, could a human cell live for ever?

In 1912, Alexis Carrel, a Nobel Prize winning surgeon and biologist, began a famous experiment in which he and his staff were able to keep chicken heart tissues alive and replicating in the lab for over 34 years (which is much longer than the normal life span for a chicken). From this, it was surmised -- and most scientists concurred -- that, given proper nutrients, cells could theoretically live forever.

In the 1960s, however, Carrel's experiment was proven to be flawed. Leonard Hayflick introduced the Hayflick Limit, showing that healthy cells actually have a finite number of times that can divide (between 40-60 times, at least for humans) before they die, become inactive or mutate into unhealthy cells, such as cancerous cells. Many researchers today believe that what limits a cell's life span is the length of our telomeres, the small, protective caps on each end of DNA strands (chromosomes). What happens is that the telomeres wear down just a little with every cell replication; until eventually they become so short that healthy cell replication is no longer possible.

What if we could prevent telomeres from shortening?

Surprisingly, cancer cells behave differently than healthy cells. They have the ability to turn off telomere-shortening and thus are able to replicate indefinitely. So, some theories suggest that telomere-shortening and eventual cell death is a built-in protective mechanism for our bodies. An opposing argument can be made, however, that if we can extend the productive life of immune cells, they may be able to prevent cancer cells from proliferating.

Not all living things succumb to telomere shortening... or even to aging. It is believed that lobsters, and certain jellyfish and flatworms are potentially immortal! And telomere shortening is reversed, aging is slowed, and life-spans are lengthened when animals hibernate. Plus, there is at least one species of long-lived seabirds, the Leach's Storm-petrel, whose telomeres lengthen with age. Some argue, in fact, that telomere shortening may not even be a cause of cell aging, but is just a side effect?

Despite many unanswered questions, however, telomere-length is currently a widely accepted theory to help us better understand aging... and how to perhaps delay it.

Is there a way to protect telomeres in healthy cells and, potentially, help us live longer, healthier lives?

The original length of our telomeres is largely determined by genetics. And while normal telomere-shortening is inevitable with human cell replication, the shortening that occurs from inflammation and oxidative stress can be much more dramatic. Oxidative stress is a type of cellular damage that can occur from factors like a sedentary lifestyle, smoking, poor diet, inadequate sleep, pollution-exposure and stress. In fact, women who were exposed to extreme, chronic stress displayed what amounted to be an additional 10 years of telomere shortening when compared to a less stressed control group -- over just a 4-year period!

And, the quicker our telomeres shorten early in life, the less "cushion" we have to protect us for the remainder of our lives.

Reducing stress and living a healthy lifestyle may help to slow the deterioration of our telomeres and, thus, slow aging. In addition, recent studies suggest that practicing meditation may even help lengthen our telomeres!

Join in the conversations
+ Add your comment for Causes Of Aging: Can Aging Be Slowed?
Showing comment(s)
Malo
December 2, 2014
Great information! Here were two articles you may find interesting. They suggest that eating a Mediterranean or vegetarian diet may help to protect or even lengthen telomeres: http://www.bbc.com/news/health-30296425 and http://www.bbc.com/news/health-24111357
Erin at WisconsinHealth
December 3, 2014
Thank you for sharing those links, Malo.
Jodie
October 7, 2014
To say that people who are exposed to chronic stress may experience faster than normal telomere shortening is fascinating but I wonder how stress is being measured since it seems pretty subjective.
Erin at WisconsinHealth
October 7, 2014
Thanks for your comment. I can't pretend to fully understand the details of this or any other scientific journal articles but, from looking at a similar study by the same authors, it appears that they consider both physiological measures (including changes in saliva cortisol levels) as well psychological measures or perceived stress (such as asking participants to indicate their levels of feeling overwhelmed, out of control, stressed, etc.).
▲ jump to top of article

Subscribe to our RSS
Information provided here should not be relied on to diagnose, treat, cure or prevent any condition, disease or illness. Please consult with your physician or health care professional for guidance on any health concern. WisconsinHealth.org is a commercial website and is not affiliated with any government agency, university, or private medical center. COMPENSATION DISCLOSURE: This site may be compensated for products promoted here. Read our Privacy Policy and Terms of Use.